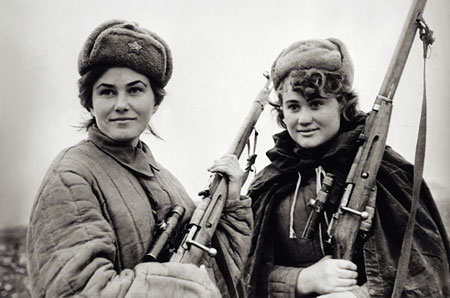 Soviet partisans operating under Sydir Kovpak in Nazi-occupied Ukraine.  My experience in community journalism has borne out a military truism: An indigenous force almost always trumps an outside invader. (Photo from Wikipedia)

So why did so many of the AOL hyperlocal sites fail? Of all the reasons being expounded, here are two I’ll add to the list based on our experiences here in Roanoke.

* Not all communities are communities. Some are simply places. For a hyperlocal site to work, it needs to be built around a jurisdiction that already has a strong sense of community. When we were figuring out what our community news zones would be in Roanoke, we had a checklist we used to try to measure sense of community. Does the place hold parades? Festivals? How big is high school football on Friday night?

Here’s a story I like to tell that illustrates the sense of community. In 2010, the Cave Spring High School and James River High School boys basketball both won state championships (in separate size classifications) on the same day. That evening, the Cave Spring team returned to Southwest Roanoke County to a modest reception at the school attended by friends and family.

Out in Botetourt County, though, the James River team returned to a full-bore parade through downtown Buchanan. A police car lead the procession. The team rode in on a firetruck, circled around downtown and then was deposited in front of the firehouse where a crowd of hundreds was gathered. Every politician who wanted to speak was given a chance, and believe me, they all did. Then all the players were expected to speak, as well! Finally, when all the speech-making was done, the team and crowd retired to a reception inside.

So I have to wonder if Patch simply picked some of the wrong places.

* Secondly, our experience has been that to do true hyperlocal journalism, or community journalism, you need an indigenous workforce. In war, a guerrilla army of natives always has an advantage over an invading conventional force. It’s the same way in journalism. Don’t hire some J-school grad from who-knows-where and send them into a community and expect them to be a community journalist; they’’ll get beat by the competition if that competition consists of true locals — even if those locals don’t have formal journalism credentials. Those locals know the place from the inside out; they will have street credibility you can’t buy. It’s better to find some people who are wired into the community and teach them the journalism skills they need than to take a fully-credentialed journalist and send them into a strange place and expect them to beat the locals. That’s not a message journalists and j-schools want to hear, but it’s the business reality.