Here what I had to say when I was inducted into the Virginia Communications Hall of Fame on March 29, 2018:

Thank you. Thank you to a lot of you.

The very first newspaper I worked for had a circulation of precisely one – my grandmother.

Every morning that summer, I got up and wrote her a personalized newspaper – and then delivered it that afternoon.

It consisted entirely of baseball scores.

I invented my own baseball league and everyday wrote up little sports stories about how the teams were doing, some of which were quite good – the teams, that is, not necessarily the stories.

So I suppose you can say that I invented both fantasy sports leagues – and, perhaps, fake news.

Now that’s maybe an endearing little story that made some of you smile, but, in all seriousness, I worry that the last newspaper I work for will also have a circulation of just one.

Very early in my career, I attended a conference here on the VCU campus. The topic was something like the future of newspapers. The main takeaway that day was that we’d probably be OK, because there would always be 12-year-old boys around to deliver the newspaper. Or, because we were starting to live in an enlightened age, some allowed that there might even be 12-year-old girls who could deliver the newspaper, too.

Of course, what no one knew back then was that someday there would be this thing called the Internet, and that it would eat away at newspaper circulation – and, more importantly, newspaper advertising – like a swarm of termites gnawing at the very foundations of our industry. And perhaps even journalism itself.

At the very time we need independent journalism more than ever.

I am deeply humbled by this honor you have bestowed upon me, because I’m not entirely sure what I’ve done to deserve this. I’m pretty sure it’s not for those fake baseball scores. But I can tell you who does deserve this honor, and I hope someday soon you will be inducting that person into your Hall of Fame – and that is whoever can devise a new business model that will keep journalism alive and prospering.

Here’s the video of the entire ceremony where I was inducted into the Virginia Communications Hall of Fame on March 29, 2018.

On March 29, 2017, I was inducted into the Virginia Communications Hall of Fame.

Here are photos taken by me, or at least taken on my phone. 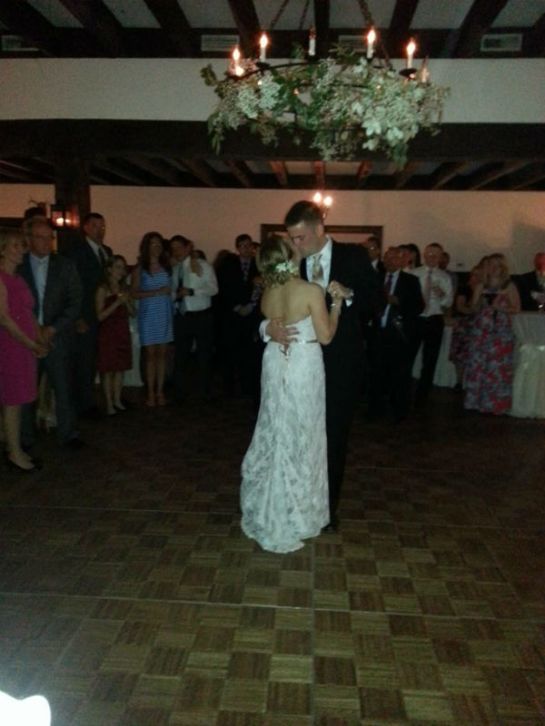 The first dance. Did a journalist take this photo?

Here’s a thought experiment: What is a journalist?

It used to be a pretty simple question. To be a journalist, you had to work for, well, a journal. A newspaper or magazine, certainly. Print people might grudgingly concede that television and radio journalists qualified. Everyone else? Not journalists. Well, maybe a freelancer or two. But that was it.

But now, in the Internet era, we know that definition has changed. But to what? If Facebook, Twitter and Instagram count as megaphones, and they do, does that mean anyone Facebooking, Tweeting or Instagramming is a journalist? At least maybe a “citzen-journalist” (whatever that means, but that’s a topic for another day.)

Here’s what brings this to mind. Over the weekend, I attended my nephew’s wedding. Lovely affair.

It’s also the sort of affair where the minister advises people at the beginning of the ceremony to silence their cellphones.

But as soon as the vows were said, the phones were back out and pictures were being taken. Naturally, I took my share through the evening (and it was a long evening — dinner, dancing, the works). At one point, a colleague asked me via Facebook: “Does your nephew know you’ve been facebooking his wedding? You have wall to wall coverage recorded for all time.”

To which I replied: “Observation: There were eight people at our table. At one point seven of them were on their phones. During the dancing, some people were shooting video from their phones and posting that. I may have actually been showing restraint by comparison.”

All of which was true. Each one of us was pumping out news and photos to our respective social media channels, from the middle-school girl across the table to the nearly 60-year-old woman at my right. So were we all journalists?

I think in many ways we all were. So if that’s case . . . where does that lead us? What are the opportunities?

The scorekeeper for the Carolina Pirates updates her live stream from the game for the fans back home in Raleigh, N.C.

First, let’s state the obvious: You can now be your own news media.

Got a blog? A Twitter account? Then you’re the media. You may not have as big a megaphone as, say, the daily newspaper or the local television station but you’re still playing the same game.

And speaking of games . . . My son plays college baseball. This summer, he’s suiting up for the Roanoke Rails, a summer league team of college players in the Carolina Virginia Collegiate League. Their first game of the season was a doubleheader at home against the Carolina Pirates from Raleigh, N.C.

I had two big takeaways from the game. One, my son went 2-for-3 with two doubles, an RBI and a run, and accounted for half the Rails’ runs in their 4-3 win in the second game.

But more to the point for this site: I saw what might be called citizen-journalism sportscasting for the first time.

I was camped out on the front row of Kiwanis Field in Salem, Virginia. About midway through the second game, a woman affiliated with the other game came by and plugged in her tablet to the electrical socket on the light pole just inside the fence. I also heard her husband mention the curious phrase “live stream.”

When I inquired, it turns out she was using some software called “Gamechanger.” She was keeping score online, using a graphical display (see the photo below) — and fans back home in Carolina could follow along online. It looks very similar to the graphical displays that EPSN and Major League Baseball use on their sites; different look, but same concept. At one point, the woman asked one of the Pirates who was on deck if his parents were following the game online and he said something to the effect of “of course.”

So let’s think about this a moment. Here’s something that flies below the radar of most traditional news media. Case in point: The Rails have only gotten three very brief mentions in The Roanoke Times in their entire six-year history; when they played for the league championship last summer, it rated just all of three sentences. Still, these teams have players and those players have family and friends . . . and now they don’t have to rely on traditional media for coverage of the game. They have their own media — a fan with a tablet and an Internet connection is all it takes. (OK, a back-up power supply might help, too; apparently the first game drained most of the juice which is why she had to plug into the municipal grid.)

True, this is a labor of love, not one where the fan is trying to monetize the event (though the makers of the Gamechanger software are surely pocketing some money somewhere.) But . . . think about the potential here. A dedicated fan could do this for other games, too. There are surely restrictions you start running into if you try to do this at a professional game or a big-time college sports event. A fan tweeting play-by-play is one thing, but this takes things up to a different level. Hey, buddy, you in Row Six with the tablet, you’re outta here; we got contracts we have to uphold.

Anyway, the point is the technology now exists where an ordinary fan could essentially become their own sportscaster. How could someone monetize this, even if it’s just a low level? Think of a high school with a rabid sports following; some radio stations cover those in some markets. What happens if an entrepreneurial fan sets up his or her own website and rounds up some advertising sponsors to foot the bill to do this? 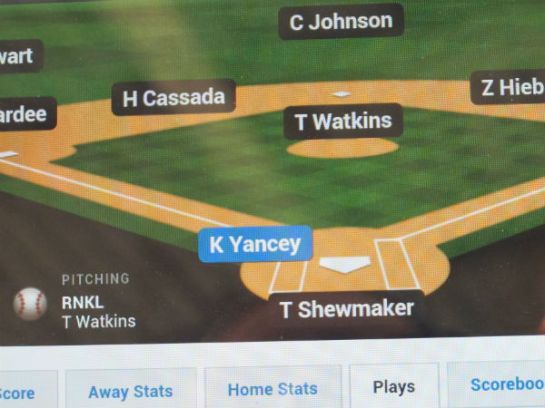 Here’s a close-up of what fans saw back home.

Investigative reporters like to talk about the impact their stories have had — corruption exposed, laws changed, the sort of things that win Pulitzer Prizes.

Community journalists like to talk about the impact their work has had, too. It’s just on a different scale.

Here’s one neat example from today: Thanks to two of our community news publications in Salem, Va., and Botetourt County, Va., we made a couple’s dream come true. We helped find them tractors for their wedding. More accurately, we connected them with readers who supplied those tractors.

Allow me to explain. In early September, April Harris contacted the newspaper with an odd, and urgent, request. She and her fiance, Jim Pruitt, has their heart set on a John Deere-themed wedding. He’s a big tractor fan, she embraced the concept but they were having a hard time finding someone to loan them some farm machinery as a backdrop for their wedding photos.

The couple was getting married in, and planned to live in, Salem — so we put an item on our Salem community news site (and then later published it in print.) We also did something we didn’t normally do, and that was to also publish it on our Botetourt County community news site (and followed it up in print there, as well.) There was no Botetourt connection, and normally we’re very strict about such things with our community news site. However, Botetourt is still pretty rural, and I suspected there might be some people there with big tractors, and big hearts, willing to help the couple.

Turns out that multiple readers in both localities saw the item (it’s unclear whether they were responding to the print version or the online version) and responded. Come wedding day, the couple had not one, not two, not even three — but four John Deere tractors. Plus a riding lawn mower!

It’s no Watergate, but we just had made one couple’s dream come true, all thanks to our hyperlocal sites.